Yesterday I wrote a blog called Location Based Lessons from FIT USA Road Trip and I am going to write a series of blogs about this experience.

At first it wasn’t going to be a road trip. As a songwriter I wanted to go to Memphis and Tennessee. I also wanted to go to places that neither I nor my wife had been, so all our experiences would be mutually new.

I would have loved to go to the Country Music Awards in Nashville, but we were too late to get tickets and accommodation in and around Nashville was up about 400% during the festival week. I googled tours for the Tennessee area and the awards and came up with pretty much nothing. There was a tour from Australia, but I really didn’t want to spend a couple of weeks with Aussies. It turned out there was a NZ tour going, I actually met them randomly in Chattanooga including getting a hug from the fantastic fiddler Marian Burns, who had so much fun playing that she had lost her voice. It was odd being in a country where people think NZ is either in Australia or somewhere below Wyoming, one woman said NZ is fabulous, they have some amazing homes in the Balkans, but I digress and she was from Alabama:)

So I contacted a few travel agents in Auckland. I visited a few and asked for brochures for the USA. No one had anything other than cruises. I then went on websites and phoned a few, saying I would like a rental car and to basically do a 3 week driving tour, focussing on Tennessee and Mississippi, based around music and history. What could they do for me. I quickly found out that they had no experience in the USA and the options they came up with made very little sense and were hugely expensive. They were not particularly helpful and their ideas ranged from fly to Chicago and drop the car back in Kansas to why don’t you do a tour of Canada. Their quotes for flights and rental cars were way above retail. They didn’t tell me about interstate drop off fees and I ended up doing half the work for them and still found them wanting.

So off to the net and DIY from scratch. The first thing I did was find the Tennessee Tourist Development Department who kindly posted me a tour book and map of the State. This was hugely helpful. I spent a lot of time reading, using Post It Tags and looking on Google Maps. I searched some car rental sites and found that Thrifty had the best deals by far and I managed to get a Ford Escape SUV for under half of the best prices that NZ travel agents offered me.

The next step was, while I wanted to be a FIT traveller, I needed somewhere to crash on the first night in New Orleans as we were arriving around midnight. I installed the Booking.com application which was recommended to me and booked an airport hotel, The Days Inn, for the first night, a couple of weeks in advance. I didn’t want to pick up a rental car in a city and start driving on the wrong side of the road at midnight after about 30 hours of travel and little sleep. The nice thing with Booking.com is that you can book and provide your credit card details, but in most cases if you cancel within a certain time, they don’t penalize you or take your money.

I also installed TripAdvisor on my iPhone and iPad which was both my lifeline and my nemesis. More on this in upcoming blogs. I relied heavily on the reviews on TripAdvisor and they never let me down. TripAdvisor was the best app I used on the whole trip, but it was incredibly time-consuming. It told me that The Days Inn was closest to the airport, had a free shuttle to the airport and that many rooms had noisy air conditioning. I figured we were going to be so tired it wouldn’t matter and I was right.

TripAdvisor is an excellent location based services application for not only acccomodation, but also places to eat and things to do. Of all the apps I used, this was the best, but it still left me wanting. This was a great lesson for me as a location based services and mobile data evangelist, eating the dog food so to speak. As I mentioned in the previous blog, I have learned so much on this trip and the big lesson is that if you are not a geek, then you have a massive learning curve with mobile data location based apps as available today. If you are a developer, particularly down under, you have brilliant opportunities to develop new applications that are more user friendly, and I can help.

I then started planning for the next 2 nights in Louisiana, which I will discuss in my next blog. I will mention that we placed a bid on MyAirNZ for a Skycouch as this was my wife’s longest flight to date (Auckland to Los Angeles) and we had 2 more flights straight after that to get to New Orleans. We were told that we could bid for upgrades using airpoints and considered that as an option but looking at the Premier Economy that looked really impressive (and obviously felt so, looking at the big grin of a retired senior politician beaming at me from one of them on the return flight to NZ) they didn’t allow you to lie down, or get anywhere remotely like that. If there are two of you and you are happy to lie down in spoon position, I’d go with the cheaper Skycouch option and note that if they are not all sold, they get cheaper the closer you get to the flight, although there is a risk that if you wait too long you miss out.

I also installed Air NZ mPass on my iPhone which I also strongly recommend you add to your smartphone. It was quite helpful at times, which I will also explain later, at least when it comes to Air NZ flights, but not very helpful for code shares where it pretty much failed.

In my next blog I will discuss my next two days and how the American tourist and hospitality industry is getting really well-connected when it comes to mobile apps, social media and web sites, but there are major disconnects between having the apps and doing something with them. They appear to be ahead of New Zealand when it comes to business prescence on apps and websites, which is something NZ travel and tourism businesses need to address, because inbound tourists are going to have expectations I don’t believe we are meeting. A large percentage of those tourists will have smartphones and expect more. On the other hand, whilst everything looks wonderful, many properties pay lip service to social and location based media after they have invested in the technology and completed the app sign off. This is a similar attitude that many properties have to their web sites. Build and forget.

Want to know what happens next? Subscribe to this blog and wait for the next one which won’t be far behind.

Having just returned from a 3,500km road trip through the Southern States of the USA, I am excited by the opportunities there are for location-based services in the tourist and travel industry. There are so many web sites and applications out there, but unless you are very savvy, being a FIT (Free Independent Traveller) on the road wanting to see and experience as much as possible is actually difficult, tiring and time-consuming.

I have spent a lot of time writing about what I think the industry needs both in New Zealand and internationally and the opportunities for developers to use tools such as those provided by various location-based services providers such as GeoSmart. I’ve written about it from the perspective of how certain industries such as hospitality, attractions, regional tourism operators could better achieve their goals and how the public can use these apps. This was the first time I have spent a length of time driving a rental vehicle through parts of the USA I have never visited before and I now have an even better perspective of the strengths and weaknesses of the sites and apps out there.

The news is good for some apps and not so good for others. I firmly believe that in future we will become connected in an almost neural fashion (not talking wires to the brain here) in a way that each of us can have the experience we want and find people and places that will allow us to have the perfect experience, whilst supporting those businesses that are trying to making a living from providing those experiences.

I’m still working through how to share this information and help make some of these things happen. My blogs will form part of this, but I look forward to talking with the developer community, tourism operators and others, presenting at some more conferences this year and also exploring ways for GeoSmart to be involved in partnering in solutions that could be world leading.

I now understand a little about why people asked me when I was in the USA, “Why are you doing a road trip?” I knew why, because I wanted to see how real America lives, not the people in the city brown stone apartments, but real people in small town USA. I wanted to eat where they did, listen to music where they did and experience the country without the hype. The problem is that there are so many delights and so many pitfalls and without having months or years to do it in, so little information accessible in real-time about what is around you.

If this is of interest to you, follow this blog and some of the links I will share. If you want to do something about your industry, develop or improve applications or help push the world towards solutions that really work. Please feel free to contact me through this blog, or through LinkedIn.

It had to happen. This could have been a great opportunity for a Speight’s Mates or Heineken Club. Perhaps it still could be. Part of the idea was offering deals if your friends turn up.

Back when I used to regularly go out bar hopping on a Friday or Saturday night, this would have been a great way to see where my friends were and catch up with them.

Facebook is adding features again, this time it is a way to find friends that are in direct proximity to your current location. Using ‘Find Friends Nearby‘, you can find others who are also currently on the hunt for people close-by. 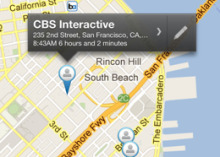 This is a very cool concept and very smart. I guess my concern is going to be about privacy. If you run an application using this technology and you can be totally assured that the data is never going to be shared with any person or organisation without your implicit authorisation. Think what big brother could do with this is an undemocratic country.

Cool or creepy? Alohar tracks your location, alwaysCNETAlohar’s technology works by using not just the usual location-finding sensors (the GPS receiver and Wi-Fi hot spot triangulation) but also other sensors and algorithms, some of which Liang…