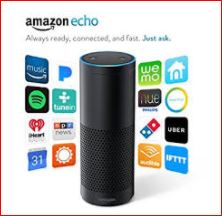 How do you feel about a device that is listening to everything that is being said in your home or office and is connected to the Internet? Especially in this age of cyber terrorism,  when we know that criminals already use tools like Facebook to target people with easy to steal and easy to sell assets.

How do you feel when Gmail bombards you with advertisements for products you have just bought or vacation location deals when you have just returned home from that place? Besides being a waste of time because you already have those things, it shows how Google (in return for giving you free email software and storage) has access to everything you write using their freeware.

So when Amazon had their massive sale on Prime Day, I thought about the Amazon Echo and wondered what I would do with it if I had one and why.

I very occasionally use Siri to save a reminder, a note, perhaps in the car to reduce the risk of having pen and paper in my hand when the lights change, or illegally using my phone because of the inherent risks, even at a traffic light. No joke, my wife has had 2 cars she was driving totalled, both while she was legally stationary at a red light. I’m not saying she could have avoided them, she couldn’t, but the people who hit our cars were certainly not paying attention.

So when I take Siri, and I have to admit it has improved in it’s ability to understand my Kiwi accent, the number of times I have said one thing and Siri has randomly rung a phone number for someone I had no desire to speak with and the fact that Siri has even randomly responded to a sound it heard, when I hadn’t even touched my phone is interesting.

I would love to have an automated home. When I got home last night from dinner in the freezing cold city it was around 6 degrees inside our house and I said to my wife how nice it would be if I could have turned on the heat pump via my phone. It has a timer, but we didn’t know when we would be home and I’m sure we could get an electrician to wire a remote switch into that circuit without having to buy a new heat pump, but I digress.

When everything I write makes a permanent footprint on the Internet and the supplier of that service has access to it all in order to ‘assist me’, I struggle with why I would want another device listening to everything I say.

Imagine living in a country like North Korea where you can be put in jail or worse for just saying the wrong thing to the wrong person, and then having a device that YOU PURCHASED providing access to every word that you said in the ‘privacy of your own home’.

Now I know that Amazon is not a spy agency, they can’t afford for this product to risk your privacy because if it did, they could go broke, but they do want to know what you are interested in and devices like these are supposed to be your personal digital assistant. I used to have an executive assistant in one of my jobs and she knew what I wanted or needed often before I did. It was awesome because I knew and trusted her. this device has to listen, even for the Alexa command to work, so technically it is listening to every word, even if in theory it is identifying most as not relevant.

The biggest issue for me with devices like this, which was also why I digressed a little with the heatpump, is that hacking or cyber crime is easy if you know how,or are prepared to pay someone to do it for you. Whether it is hacking someone’s wireless internal garage door or front door, checking Facebook to see who has a boat in the their back yard AND is on holiday overseas is really simple, because most people don’t know how to or don’t want privacy, because they don’t realise the risk.

I read a CBS story this morning about how some cheap Chinese mobiles are apparently surreptitiously sending information from the mobiles back to China using firmware that was in the phones from the factory.

For now I think I’d at least like to be able to use the fingerprint recognition on my phone and tap a button to turn on an appliance if I can’t be bothered standing up to do something like turn on a light. I am happy that I can have a wireless remote system with security algorithms to do that. I’m not sure I want Amazon or a hacker to be able to listen to everything said in my home and then using data mining tools to look for keywords or information that could be used by criminals, or by advertisers to send me more info I don’t want.