Are you thinking about buying a new GPS Car Navigation device or application? I blogged on this topic last year and the blog proved to be incredibly popular, so its time for an update.

People still tell me that they know their way around and don’t need car navigation. Perhaps so, but they don’t know what the traffic is like on the way to their destination and real time traffic is one of the most valuable features of today’s car navigation devices.

As I write this, a storm has been forecast for most of the North Island. This means flooding, accidents and every man and his dog in Auckland has taken their car to work, which means a crawl on the motorways. Wouldn’t you like to know what roads to avoid? 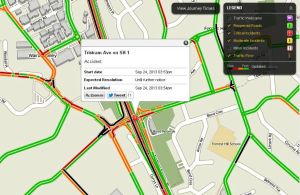 TomTom includes the data used by AA Roadwatch, which is a great resource to check before you get in your car, but doesn’t help once you are driving and a new incident occurs. What is your time worth? Where would you rather be?

Over the last week I have been trying out the new TomTom GO 600 and have been comparing it with other brands and devices that I have used as well as with Google Maps on my iPhone which a lot of people are doing these days. I have been very impressed.

Now this blog is my opinion, and it is based on years of experience working in the industry with many brands of car navigation, including OEM in-car, Portable Navigation Devices (PND’s) and mobile applications.

Works Out of the Box. Getting started with the new device was a breeze. I plugged it into my computer and within a short period of time had the account set up, the latest maps (and a $20 credit for a purchase such as one of 103 different celebrity or funny voices) and was on my way. The user interface is the easiest I have seen to date, including previous TomTom devices.

Display Size. It has a 15cm (6″)  touch screen which seems bigger than the unit that is built into my car dash. This is brilliant when it comes to data entry. My hands aren’t that big, but this does make life much easier when it comes to entering an address.

Finding Your Destination. It has never been easier. You used to have to know what suburb you were looking for, or go through menu’s to find a business. Now you just start entering data and tap the destination. It shows you how far to your destination and by default tells you where the nearest car parks are. There seem to be way less buttons and it is far more intuitive.

TomTom has come to the party with lifetime maps and lifetime real time traffic. That’s a big one for me because these devices are extremely reliable and knowing I don’t have to buy either of these again in the near future is a big plus. Don’t tell anyone I said this, but they last for years! 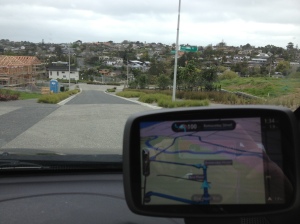 I tested the TomTom vs Google in new subdivisions in Auckland and Google was well out of date as you can see from the images.

This new subdivision in Long Bay is growing rapidly. The TomTom not only has all the roads that are open to the public, but also shows the new roads that will be opening in the next few weeks and months. Google only has about half of the actual roads in this location and people are moving into their new homes in the next month.

I’ve been at the end of the phone in a previous life when people rang to complain that their home or their business wasn’t on their brand new portable navigation device. Whilst many brands say they do updates ‘up to 4 times a year’, find out exactly what they updated and look for areas you might want to visit. The great thing is you can usually try a device out in the store before you buy.

TomTom Traffic. My last TomTom had a SIM Card in it and this was great until it expired and Real Time Traffic stopped working. It’s not a big deal to get it going again, but you had to pay for an update. The new TomTom ‘tethers’ to my mobile. That means that it uses my iPhone (wireless) to access the Internet (just for traffic data and it doesn’t use much at all) and it was so easy to set up! I’d never tethered a device to my iPhone before, but it was done in no time and worked first time.

TomTom uses a combination of real time traffic information from commercial GPS tracked vehicles as well as other TomTom users and is very accurate. They have been doing it around the world for a few years now and have the ability to differentiate what is normal and what isn’t. They have important data such as actual speed zones for the whole country.Some solutions decide what the speed zone might be, based on observed speeds. if we all observed the speed zones, they wouldn’t need the ‘safety camera‘ feature:)

I’ve had situations, such as with the mobile application Waze, where it warned me of slow traffic, which was in fact just normal traffic waiting at a red traffic light. TomTom also has ‘journalistic data’ which often explains why there is a problem and it offers you the choice of alternate routes while you are driving. you can preset it to automatically change to the best route or manually instruct it. 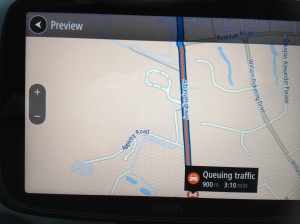 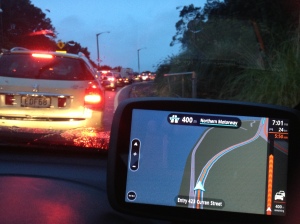 Traffic isn’t just about density either. TomTom knows about planned road maintenance, it knows that the motorway north is going to close at 8PM. It knows the best way to bypass that including the impact of the people who didn’t know it was going to be closed and created extra congestion.

It shows you where on your route the delays are, what time impact they will have on your journey and how much farther the congestion goes for in distance.

Have you ever been in a queue of people wanting to get on the Auckland Harbour Bridge from Herne Bay, finding its closed and trying to work out how to get to Fanshawe Street on a cold wet winter’s night? I have. That’s when I remind myself that knowing the way isn’t all there is to navigation.

But wait there is more. I’m not going to go into every feature, like tap and go, pinch to zoom and a 2 hour battery life, but there are a few really important things that will make a difference for you.

I love the TomTom GO 600. I still believe that a separate device (especially with the big screen ) is the best way to go. It is designed for a purpose and leaves your phone to do the other things it was designed to do. I love the way it uses my phone for real time traffic so I don’t have to worry about the service expiring.

TomTom does have apps for iPhone and Android devices and they do work on the basis that you download all the maps and software onto your device so you don’t have to pay to download map data as you drive. They have nice features including muting your music to hear the instructions, navigation to your contacts (Navman used to do that on my Palm) integration with your calendar and your social media including Facebook, Foursquare, Twitter and even SMS functionality. I might do another blog on that at some stage. One important difference is the GPS antenna. The GPS on your dedicated nav device is far more accurate and this can be important, as I mentioned previously, on a busy road when you miss the turn you wanted.

Whilst Google has some good new features and is ‘free’, it still uses a lot of mobile data and that costs money forever unless you work for a telco. Don’t take my word for it. Use a data usage application on your mobile before you start a journey and check it when you finish. Multiply that mobile data cost over the number of times you might use navigation over a year and you may find buying a dedicated device is cheaper. I know you can cache Google data to your mobile now, but I’m not convinced it is a better choice. Then of course there is information such as local speed zones and currency of maps.

I still use Google when I’m walking and using public transport locally and overseas.

When you compare car nav devices, don’t make the mistake that some reviewers make and test in urban centers where things don’t change much. Test it in areas where there are new motorway extensions, new suburbs, changes to intersections. Urban centers don’t change much, although Wellington turned some of its 1-way streets in the opposite direction and of course there were the Christchurch earthquakes which changed everything!

As I said, this is my opinion based on many years of professional experience. I welcome feedback and your comments on your experiences.