I’ve said it before, I love seeing crooks get caught by being tracked by GPS 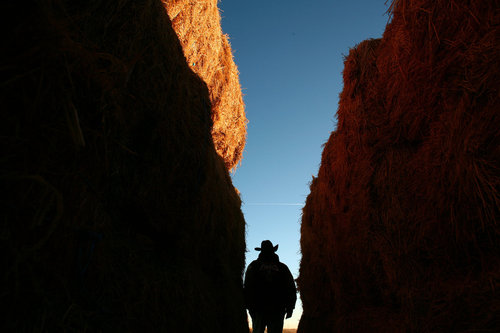 Drought and grass fires have pushed the price of hay to near records, making it an increasingly irresistible target for thieves or desperate peers.

The hay may only be worth $200-$300 but it’s feed and the livestock are depending on it. I have had many discussions with companies supporting farmers, but this is a first, although  very logical one.

Smart GPS companies who are struggling to sell people on car navigation because most people already have one, might do well to repackage tracking devices and sell them to farm supply companies.

The price of GPS receivers is now getting to a point where we are likely to see the launch of hundreds of devices that allow tracking in the near future. Anything that has a reasonable value and is at risk could be tracked, from artwork, to pets or your elderly…

So it happened again. A 62 year old woman driving home from Christchurch crashed her car down a 5 metre bank on her way home to Greymouth, was the story in this morning’s NZ Herald.  If she had a GPS capable mobile with the type of tracking application I have been blogging about here and here, she may not have had to spend2 days lying on broken grass out in the cold and could have been rescued far sooner.

The GPS in her phone could have told family or rescuers exactly where she was and with tools like GeoSmart’s Directions API, her rescuers could have had turn by turn directions right to the site of her misfortune.

This is not an uncommon story. Given the bush, the narrow, dark and windy roads around New Zealand’s beautiful countryside, combined with sometimes treacherous conditions of rain, black ice, snow, flooding and slips, there are frequently stories of people losing their car and slipping into a ravine, or worse. I hate to think of what the cost is in resources for search and rescue. Over a year it must mount up to far more than the cost of developing a mobile application that could work on all phones.

In urban areas, often cell triangulation would work, but in the many rural areas, the cell towers are often too far apart to provide an accurate fix. It’s interesting that the topic of Tracking Elderly People is one of the most popular searches that find my blogs. Of course it isn’t just about elderly people. There are many segments of our population that could benefit from a mobile tracking application. People like diabetics, blind or disabled, people with other illnesses such as asthma, allergies such as bee and wasp stings, epilepsy and Alzheimers or other forms of dementia are just a few examples.

Hopefully sometime soon, someone will use GeoSmart’s tools or come up with some funding to develop a tracking system to solve this problem.

An interesting story originating from the Sydney Morning Herald last week, and doing the rounds in New Zealand, says that ‘Privacy Experts’ and Unions are saying that vehicle tracking systems used by companies are an invasion of staff privacy.

It goes on to talk about a former Telstra employee who committed suicide shortly after having a vehicle tracking system attached to his company vehicle. The employee was being treated for depression and the story infers that his suicide was in part a consequence of Fleet Management equipment being installed in his vehicle.

Over the last decade I have been in various ways involved with Vehicle and Personal Tracking technology and only once have I come accross a company that wanted it to be able to check up on the honesty of their staff.

There is no question that some companies have found a sudden increase in profitability and decrease in vehicle costs since they put FM systems in place, but monitoring staff integrity was not the reason the system went in. This particular company wanted to know which vehicles were close to clients that needed urgent service so that they could allocate the nearest vehicle to provide a quality reponsive service.

A few years ago I met the CEO of a rapid response plumbing firm. They guaranteed a minimum response time for people who needed a plumber in an emergancy. He was able to manage this as a consequence of using Navman Wireless technology to locate the nearest vehicle to the job.

They also wanted to compare time based service contracts to the actual time the vehicle was parked at the client site. They wanted to know if they had under or overquoted because there was sometimes a gap between the sales person’s enthusiasm to win a contract and the reality of the job being done.

What did happen was that a number of staff people whom they had suspected of taking liberties with the vehicle on the job and after hours, left the company within a month or so of their own volition.

I am against (and it may well be illegal) tracking people and their vehicles without their knowledge. The only people able to do that should be the Police and even then, only with a legal warrant produced through the courts.

On the other hand there are many potential benefits. In the courier and freight industry, Fleet Management means that people can easily apply track and trace to good being picked up and delivered without needing additional staff to place calls to drivers.

In the security industry it means that security guards on patrol can confirm the safety and location of their staff and also provide clear evidence to clients that their premises have been visited when they said they were. It can also mean that these people can be backed up in an emergancy. This technology is used internationally to track and protect the safety of VIP’s such as politicians in government vehicles.

Another area that is becoming popular is using this technology to keep track of a personal vehicle’s location. For example, when Dad lends the car to his son or daughter who is just popping down to the shops or a mate’s place, who could be boy racers. There have been a number of occassions where a stolen vehicle has been recovered with the thief still inside, such as the case earlier this year. Sometimes a car is irreplacable such as a classic, or sports car. Insurance money can’t always allow someone to recover the time spent in restoring or bulding a vehicle. This technology can also be used to secure trailer water craft and motorcycles which are often easy targets for criminals.

Another area which is becoming very popular and which I have written about a number of times before is tracking elderly people. With the Baby Boomers living longer and being more mobile, there is a growing population of elderly people, some of whom are sprightly of mind, but less of body and at risk of breaking hips or other body parts, while others are sound in body but suffering onset of Alzheimers Disease or other forms of dementia and likely to wander off and not remember where they live. Whether it is the Retirement Village or Rest Home, or their children, this common problem becomes much easier to manage if you can send a text message to the device they are carrying and receive one back with the nearest street address to their current location.

I think tracking is a great thing for unions to use to help them shore up membership and totally endorse them helping people out when it comes to unethical practice on behalf of the company they work for. However, in most cases FM (Fleet Management) is about providing better service to a company’s clients, being able to stay competitive in a time of heavy traffic, high cost of petrol and consumers who expect cheaper prices.

First of all I’d like to give you a quick update on the personal tracking unit I’ve been testing. It’s going really well. Please note I do not work for the company who is developing it, although if they go to market they will be using our mapping data, which I have been testing it with.

So I have tried it out in various parts of the country and it can track me wherever I go. If you had the logon and password to my account you could see where I have been on a map. You can play back my travels around Auckland, Wellington and Christchurch. When I was in my car you could see emergancy button

how fast I was driving and my exact route.

If I hit the red emergency button a text message gets sent to a phone (in this case mine). I had it sent to my wife when I first set it up because then she cpould see what I was up to and I thought that would be interesting. Stupid really because I couldn’t see if it was working and she was geting really worried because on some days she would get lots of messages saying that I had an emergency.

Basically the message gives my name and says I had an emergency. If I was inside at the time I sent the emergancy it gives the last known street address, which is usually the correct address because it has a movement sensor and will take a fix every time the device moves which obviously was set off last time I got out of the car. It uses the GeoSmart Reverse GeoCoder to retrieve the nearest street address to the co-ordinates where it was taken. The reason it gives the last address, is because with current satellite technology it can’t get a fix inside the house unless I am in an optimal position. This will of course improve when the Gallileo

It operates as a phone so a call centre can call me if they think there is a problem. It also can function as a phone with a number of preset buttons, which is great for elderly people who only have a few people they need to ring and find mobiles confusing.

A footnote on Orcon, I got a call today saying that they are onto it this time. They said the engineers that have been visiting don’t have sophisticated enough test gear to test a phone line for interference that wouldn’t affect phones and event ordinary ADSL. So hopefully I will see an engineer, at least this time they phoned me:)